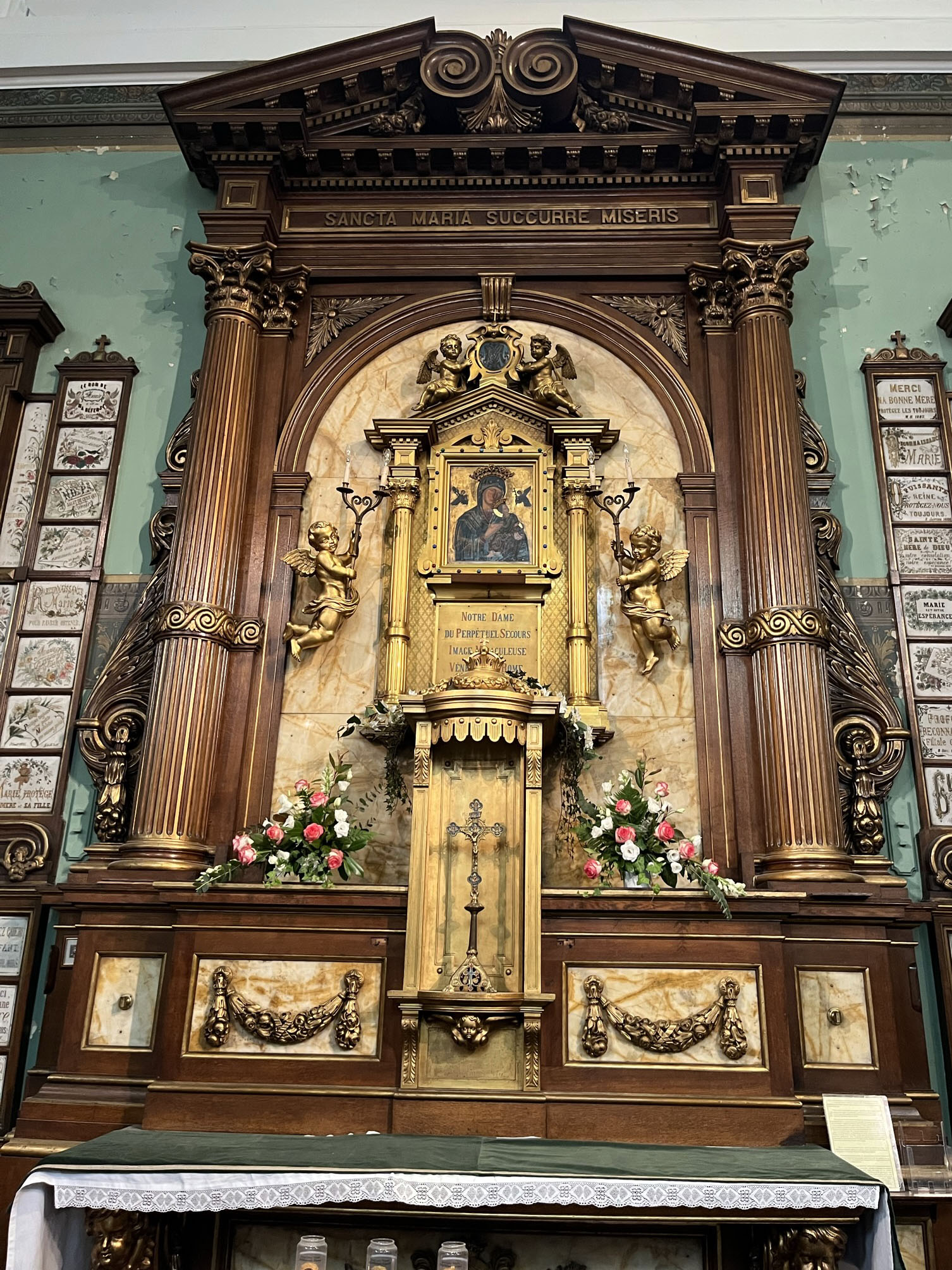 In Byzantine style, painted on wood and with a gold background, the image of Our Lady of Perpetual Help is about 50 centimeters high. The Virgin appears there with her divine child; on their foreheads shines a halo of gold. Two angels present the instruments of the Passion to the frightened Child Jesus, while the Blessed Virgin watches the pathetic scene with calm and resigned pain.
After having been venerated for a long time in Crete, the image of Our Lady of Perpetual Help was taken to Rome by inhabitants of this island who were fleeing a Turkish invasion at the end of the 14th century. At the invocation of Mary under the title of Our Lady of Perpetual Help, the ship carrying the holy image was saved from a terrible storm. On March 27, 1499, after triumphantly traversing the streets of the Eternal City, preceded by the clergy of Rome and followed by the people, the portrait of the Virgin of Perpetual Help was placed above the high altar of the Church of Saint Matthew. , near Sainte-Marie-Majeure. Thanks to the care of the Augustinian monks, the holy image became the object of a very popular cult, which God rewarded over several centuries with numerous miracles. During the troubles of the Revolution of 1789-1793, French troops occupying Rome destroyed the Church of Saint Matthew. One of the monks who served this sanctuary had time to secretly carry away the miraculous Madonna.
He hid it with such care that for sixty years one wondered what had become of the famous painting. God permitted a providential combination of circumstances to rediscover the venerated image. Saint-Alphonse de Liguori built in the enclosure where the Saint-Matthieu church once stood. On April 26, 1866, the Redemptorists solemnly enthroned Our Lady of Perpetual Help in their chapel. Since that time, thanks to the zeal of the sons of Saint Alphonsus and the innumerable miracles obtained in their sanctuary, devotion to Our Lady of Perpetual Help has taken on extraordinary growth. On June 23, 1867, in order to recognize and perpetuate the memory of these precious favors, the Vatican Chapter of the Canons of Saint Peter crowned the holy image with great pomp.
In 1876, Blessed Pope Pius IX erected an archconfraternity of Our Lady of Perpetual Help in the Saint-Alphonse church. Today, the Blessed Virgin is invoked under this name in most Western churches.

For more than 150 years, the faithful have followed one another before this altar. Among others, in 1868, Queen Marie-Henriette of Austria (1865-1902), wife of King Leopold II, knelt there for nine days. The ex-votos on either side of the altar are silent witnesses to the many benefits obtained through the intercession of the Blessed Virgin. The chronicle of Saint Joseph’s Church tells us, among other things, of the miraculous healing of a young girl: “A young Protestant convert was suffering from a paralysis declared incurable. On the advice of a priest, she asked Our Lady of Perpetual Help for her healing and that with very noble intentions: to be able to follow her vocation for religious life and open her eyes to her two sisters who had fallen into heresy. She then began a novena without result. The end approaching, she demanded that she be carried before the icon of Our Lady and declared that she would not leave until she had been heard. After each Ave Maria she recited, she cried out from her soul: “Good mother, heal me!” She was miraculously healed. 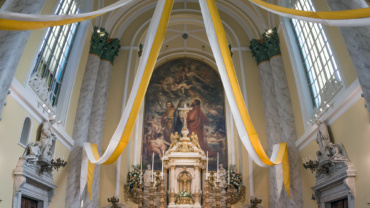 The sculpted white marble high altar is the work of Édouard Marchant (1848). It is surmounted by two figures from the Old Testament, which represent the sacrifices of the Old Law: on the right Melchizedek, and on the left Aaron. 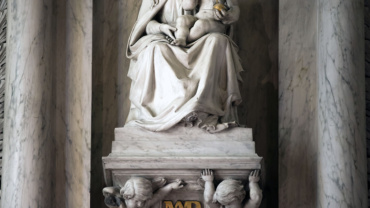 Statue of the Virgin overlooking the altar

Statue of the Virgin overlooking the altar of the Notre-Dame du Bon Conseil chapel. 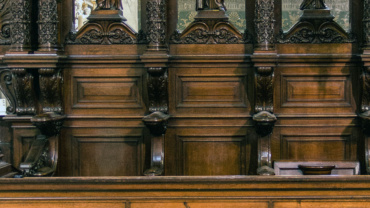 On either side of the chancel, the Renaissance-style choir stalls are the work of sculptor Charles Geerts; they are surmounted by arcades in which you can see Christ, Saint Paul and the twelve Apostles. 1. Christ, 2. St. Peter, 3. Saint Paul, 4. Saint Andrew,…